If you are newly diagnosed with IBD, you may not yet understand the connection between  IBD and your dental health.   It still shocks me that most of us don’t get the connection, but 9 times out 10, anyone with IBD has had gingivitis, cavities, root canals, extractions and implants.  It’s the double whammy.  Your dental health is a reflection of what is happening in your colon.  The mouth hosts a number of viruses and bacteria’s found in the GI tract and when you throw off your gut ecology, it changes the your dental ecology has well.  An acidic mouth is the perfect host to plaque and gingivitis.    You need to buy this book and it will  show you how to reverse gingivitis and cavities. For years, I was embarrassed at having the distinction of having the worst mouth my dentist had ever seen.  While I have perfectly straight, white teeth in front, behind the scenes was another matter.  I had plaque deposits and needed to be cleaned every 3 months; I’ve had 4 root canals and 2 extractions, dry sockets from bad extractions (wisdom teeth removed as an adult) and constantly inflamed gums.  I’ve learned a lot in the last 8 yrs. and after repairing my health with nutrition, I have repaired my dental health as well.   Here’s why nutrition works from Rami Nagel.  I strongly encourage you to buy his book.

The absence of essential nutritional factors, along with the presence of injurious factors, explains why native people had healthy teeth, while “modern people” suffer from severe tooth decay.

Why Do These People Have Such Healthy Teeth? 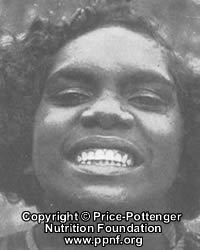 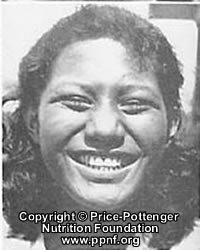 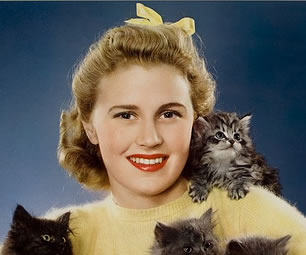 Joan Caulfield was an American actress born in 1922. Americans used to eat real foods and have relatively healthy teeth and well-rounded faces.

And Why Do These People Have Severe Tooth Decay? 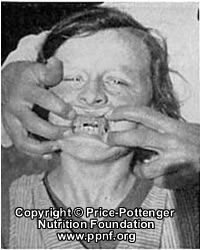 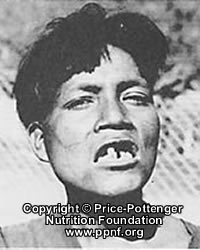 In the 1930s Dr. Weston Price sought to find control groups around the planet to confirm or deny his hypothesis about nutrition and tooth decay.

In every instance Dr. Price found that when individuals of the same ethnic background had lost their isolation from the modern world, they then adopted modern foods and food habits of commerce. As a result there was an early and rapid loss of immunity to tooth decay.

Some groups Dr. Price studied, such as isolated Australian Aborigines, remote tribes in Africa, Canadian Indians, and isolated groups of Eskimos, had no occurrence of tooth decay. They were completely immune. They also maintained a high degree of health and physical perfection, which included strength, endurance and an ability to deal with harsh climates.

When these same healthy groups of people, who for generation after generation produced physically perfect offspring, nearly 100% free from tooth decay, just changed their diet to a diet of commerce (like the diet we eat today), they rapidly experienced disease and tooth cavities.

Dr. Price’s studies included a chemical analysis of foods of the isolated groups and also of the industrial foods (the foods most of us regularly eat) that displaced the indigenous foods. He found that the isolated diet, which produced a high immunity to tooth decay, had several times more vitamins and minerals than the modern displacing diets.

Our modern displacing diet is the cause of tooth decay. Preventing tooth decay has little to do with tooth brushing and fluoridating water. If these strategies worked, people would have fewer and fewer cavities because most people brush frequently and almost 70% of the United States now has fluoridated water.

Approximately 90% of people in the U.S. have had tooth decay at least once in their lives. This is a result of a “modernized” diet, consisting of many junk and processed foods. The modern diet lacks the vitamins that our bodies need, and as a result, our teeth decay.

Oh Man. You feel that aching sensation. That dreaded feeling you continue to ignore. No, it cannot be, your mind says… You have a cavity. Tooth decay is caused  a deficiency of vitamins, minerals, and other nutrients that the body needs to build healthy teeth. It also results from eating, drinking, or exposure to too many life depleting substances. First we need to understand…

What is a Cavity?

A cavity is when a tooth decays and the barrier between the saliva, and the tooth root or pulp, is breached. The inner part of the tooth contains blood vessels and a nerve. The nerve registers pain and you feel a toothache as a result. 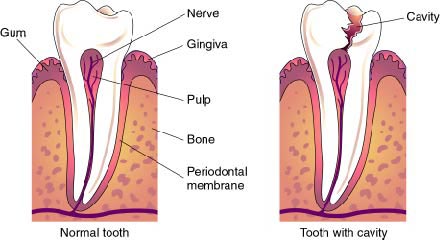 Eventually  you will feel more pain, and thus require a dental treatment to block the pain by protecting the sensitive nerve in the tooth. If the cavity is allowed to progress, the inside of the tooth can become infected; this is called an abscess.

Do not Blame Yourself For Cavities

Although you are completely responsible for your life and health, I encourage you to not blame yourself for your cavities.

The reason I say that is because most of the time people are not educated properly as to the real cause of cavities. Since you did not fully understand the real reason for your tooth decay, how can you be expected to act in a way that would prevent the decay?

“Daily, the calcium and phosphate of the enamel migrates out of the teeth to the bones, heart, brain and other places where it is needed. This is called by dentists demineralization.”

Tooth decay begins many generations back.

“The weakness of calcium deficiency is passed from parent to child. By following the same paternal pattern of ‘poor food selection,’ each new crop of babies becomes weaker. ‘The sins of the parents are passed on to the third and fourth generation.’”

In other words, our modern diet is deficient in bone building nutrients, and as a result, many people get cavities and as they age, tooth loss.

Special Foods Are Lacking In Our Modern Diet

Many indigenous tribes ate raw grassfed butter, fish eggs, shellfish with the organs and organ meats of wild caught animals. Many tribes required a period of premarital nutrition, and children were spaced to permit the mother to maintain her full health and strength prior to her next pregnancy. Thus children were born into a world with a high degree of physical excellence.

Since we hardly eat foods rich in fat-soluble vitamins in our modern culture, and since we do not practice a special time of preparation for pregnancy, we have created an environment where tooth decay is likely to happen.

A diet high in fat-soluble vitamins, minerals, and whole and unrefined foods is essential to halting tooth decay.

You cannot continue to go haphazardly through life, eating life-depleting foods (foods of industry) and drinking life-destroying beverages and then expect your teeth not to decay.

Eat As Close to Nature As Possible

Eating healthy is not just about eating fruits and vegetables. It is about eating mineral dense food sources, regularly, as in twice per day or more.

Here are some special foods that will help Cure Tooth Decay.

I am giving away part of the protocol because I believe the world deserves to know how to be healthy. Plus, the protocol is not the secret; it is learning about it, and motivating yourself to implement it that is the challenge.

1/2 teaspoon 2-3 times per day of Green Pasture’s Royal Blend fermented cod liver oil / butter oil mix (1-1.5 teaspoons per day) 1-4+ cups of raw grassfed milk daily, or 4 ounces of raw grassfed cheese 2 cups daily of bone soup, made from slow cooking the bones and organs of fish, chicken, beef and so on. Optional, and helpful: 1-4 tablespoons of grassfed bone marrow. Either raw or cooked. Also make sure to avoid, limit and monitor the intake of the foods that cause and promote cavities. Full dietary protocols and explanations as to why you need special foods and more detail about remineralizing tooth cavities are available in the print book Cure Tooth Decay. http://www.curetoothdecay.com/Tooth_Decay/foods_stop_decay.htm